This time of year always makes me nostalgic about romance, not because Valentine’s Day is a month away, but rather because the first time someone tried to set me up for an arranged marriage, it was just after Christmas.  I should add here that nothing good came of that setup, but that’s a story for another day.  I choose instead to remember with admittedly rose-colored glasses the potential for new relationships during the New Year.

Over the holidays, I caught up on a few phone calls and one in particular got me reminiscing about how glad I am that the setup phase of my life is over.  The aunty I was talking to encouraged me to introduce a young relation of ours to any nice young men K and I might know.

I should clarify that “any nice young men” actually meant “any nice young Hindu men over 5’9” with a professional degree.”  I’ve always said that with my parents’ restrictions of religion, caste, background, education, (and the list goes on) I had a dating pool of one, and he lived in a different country.  One short-lived setup was 14 time zones away, meaning we only spoke when one of us was going to bed and the other was just waking up. 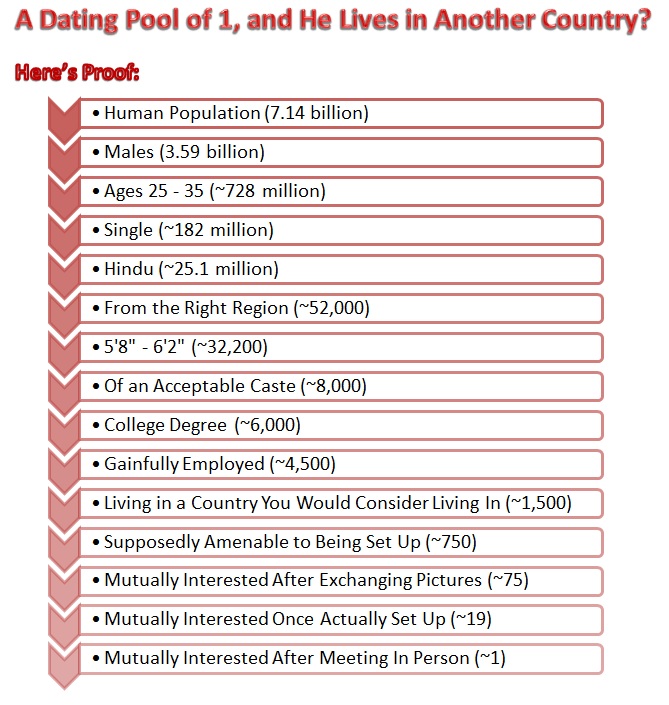 The young relation in question is a beautiful, smart, fun young woman with a promising career, lots of friends, and varied interests.  This is not the sort of young woman who needs to despair of ever finding someone to share her life.  Of course, her parents and other relatives feel quite differently about the matter—if you’re a single gal over 25 in the Indian community, many of the older generation believe you’re firmly on the shelf.

My husband mentioned that the only single guy who met the basic requirement of “nice young man of Hindu origin” was somewhat height-challenged, which immediately shut down the whole phone call because the young lady in question is statuesque and, yes, tall.  Not excessively tall, mind you, but of a very average height for women in the United States.

Short Indian men and tall Indian women are simply doomed in the romance department.  Some parents, like my wonderful father-in-law, might even caution their offspring, “Are you sure you’re interested? She’s quite short.”  Incidentally, my father-in-law no longer sees my height as a critical character flaw or as a source of friction in my relationship with K, who  keeps a small step stool in the kitchen so I can reach those higher shelves when he’s not around to help.

Since our height difference (K is nearly a foot taller than me) doesn’t fundamentally impact our marriage, we often wonder about the arbitrary requirements people seem to have for setting up their children.  “Oh, you’re tall, she’s tall, you should meet! (And marry, and have lots of tall babies…)”  All these superficial factors, like height and education level, don’t really matter if the person you’re meeting doesn’t treat you well or if you don’t have anything (important) in common.

And don’t get me started on other superficial things, like the aunty who didn’t even consider introducing me to her son because my complexion wasn’t pale enough to suit her.  Hello, lady, we’re South Asian: they call us “brown” for a reason.  I’ve always thought I dodged a bullet with that one—can you imagine how antiquated all her other ideas must be if she’s hung up on the skin tone of her son’s future wife?

Stay tuned for more on the great arranged marriage debacle, and read a previous post on the topic here.